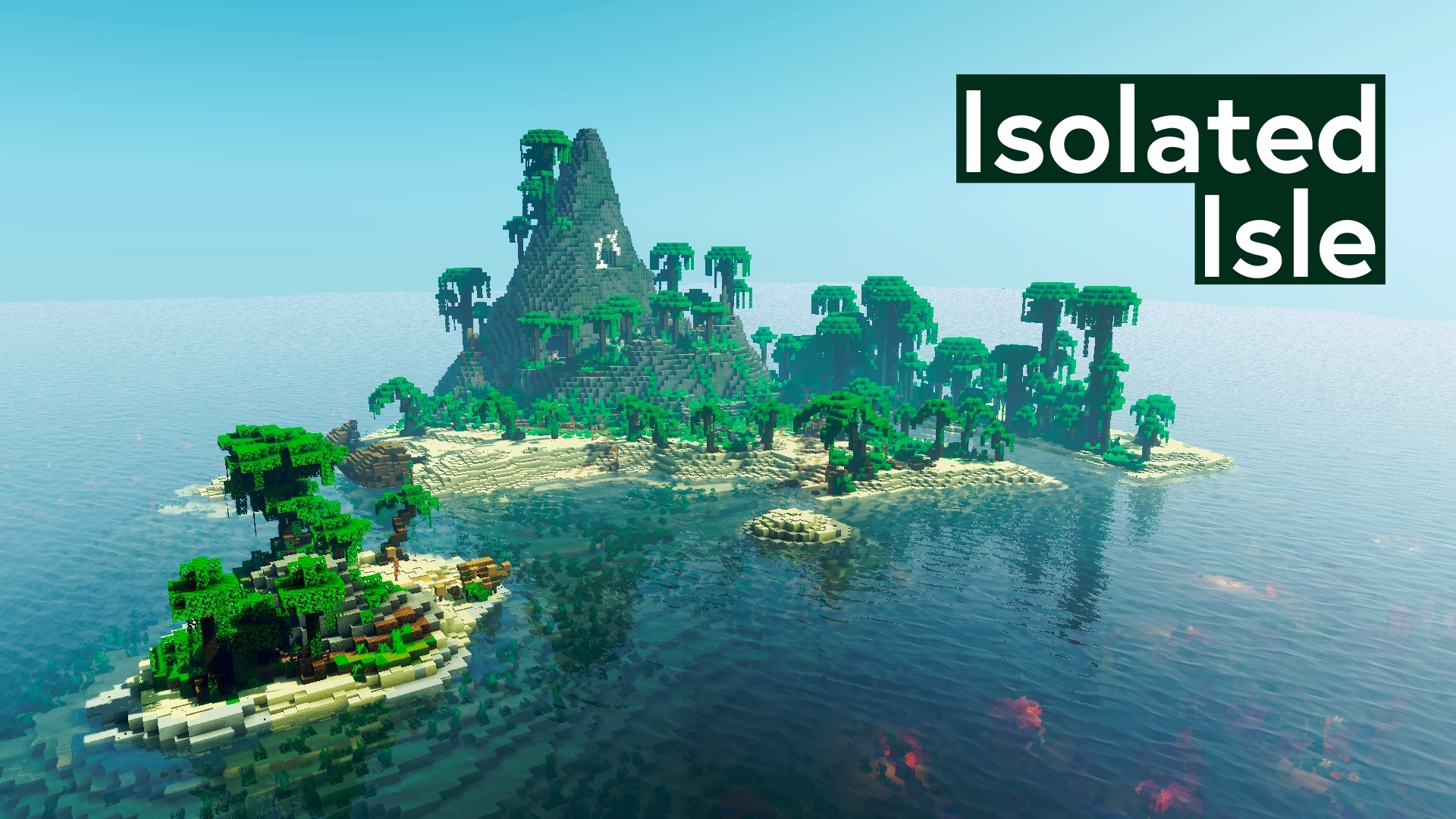 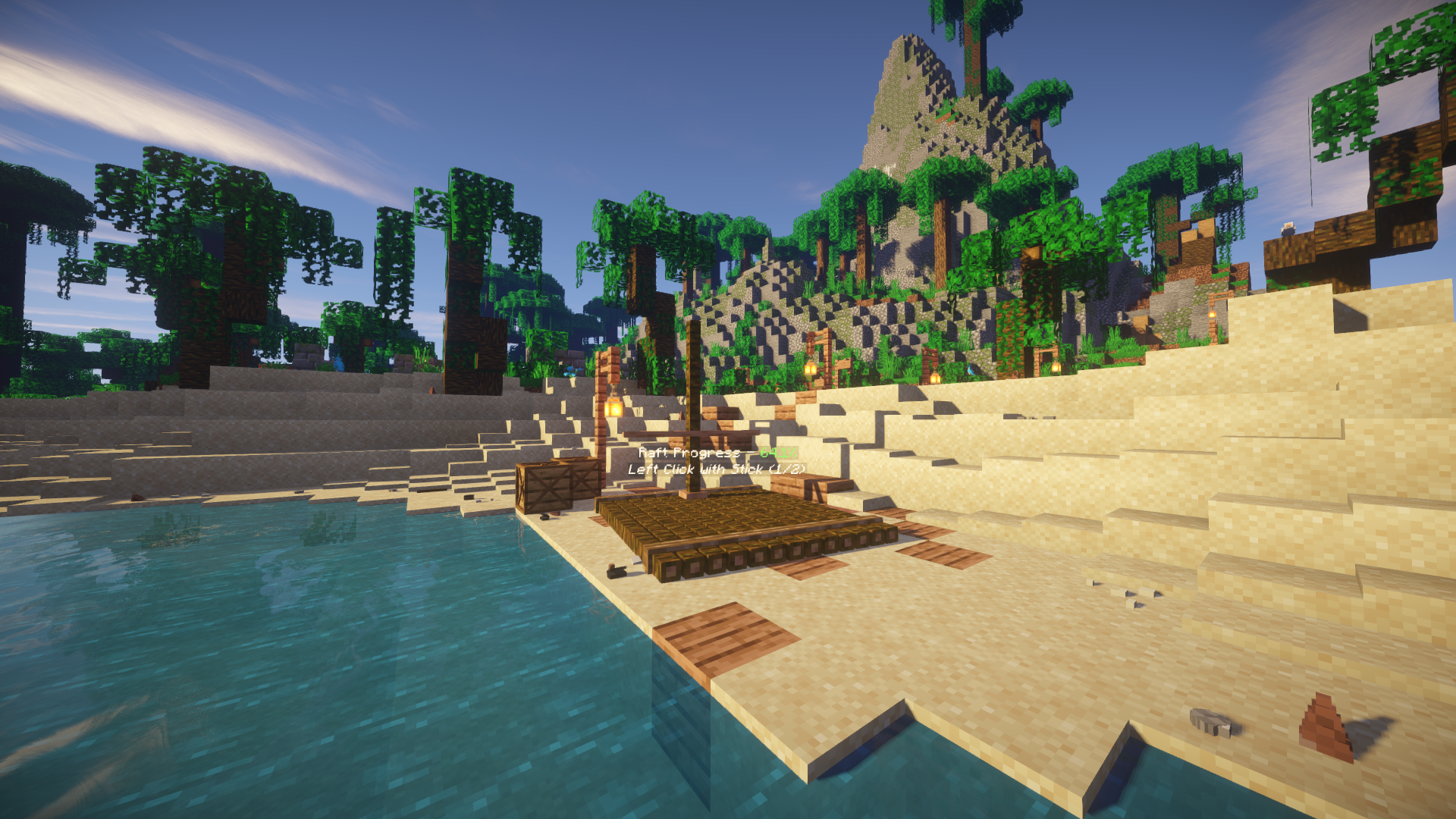 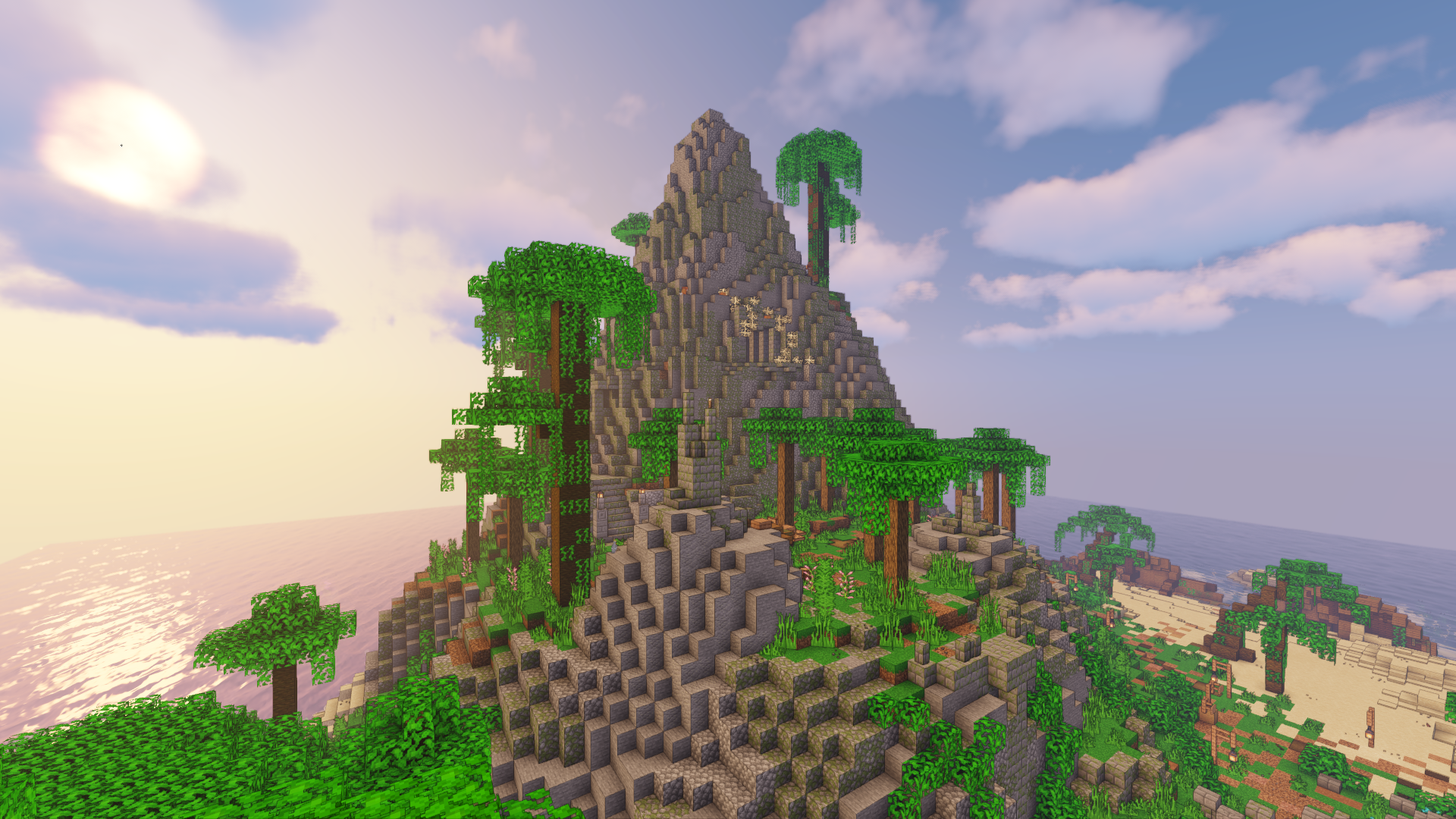 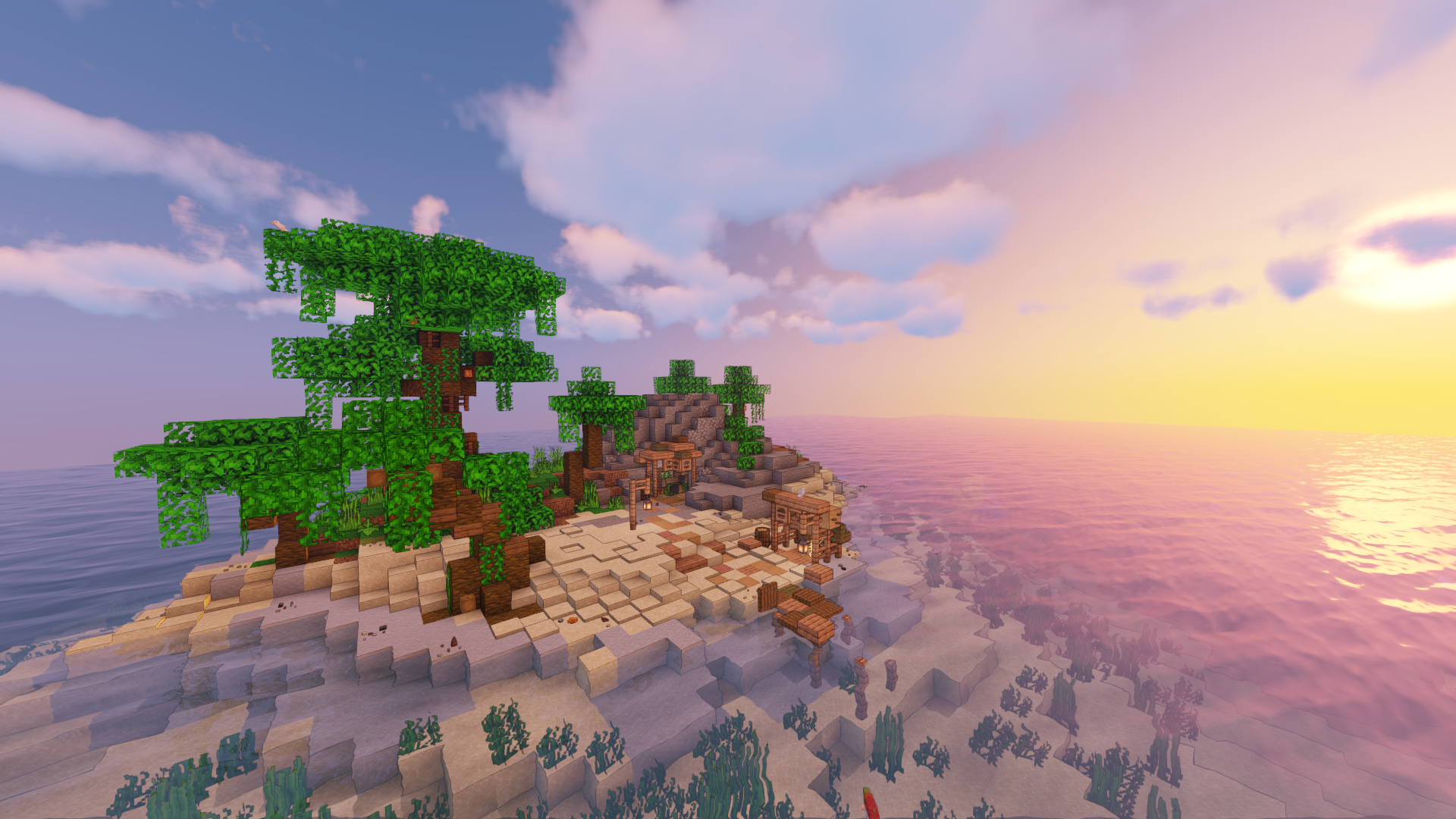 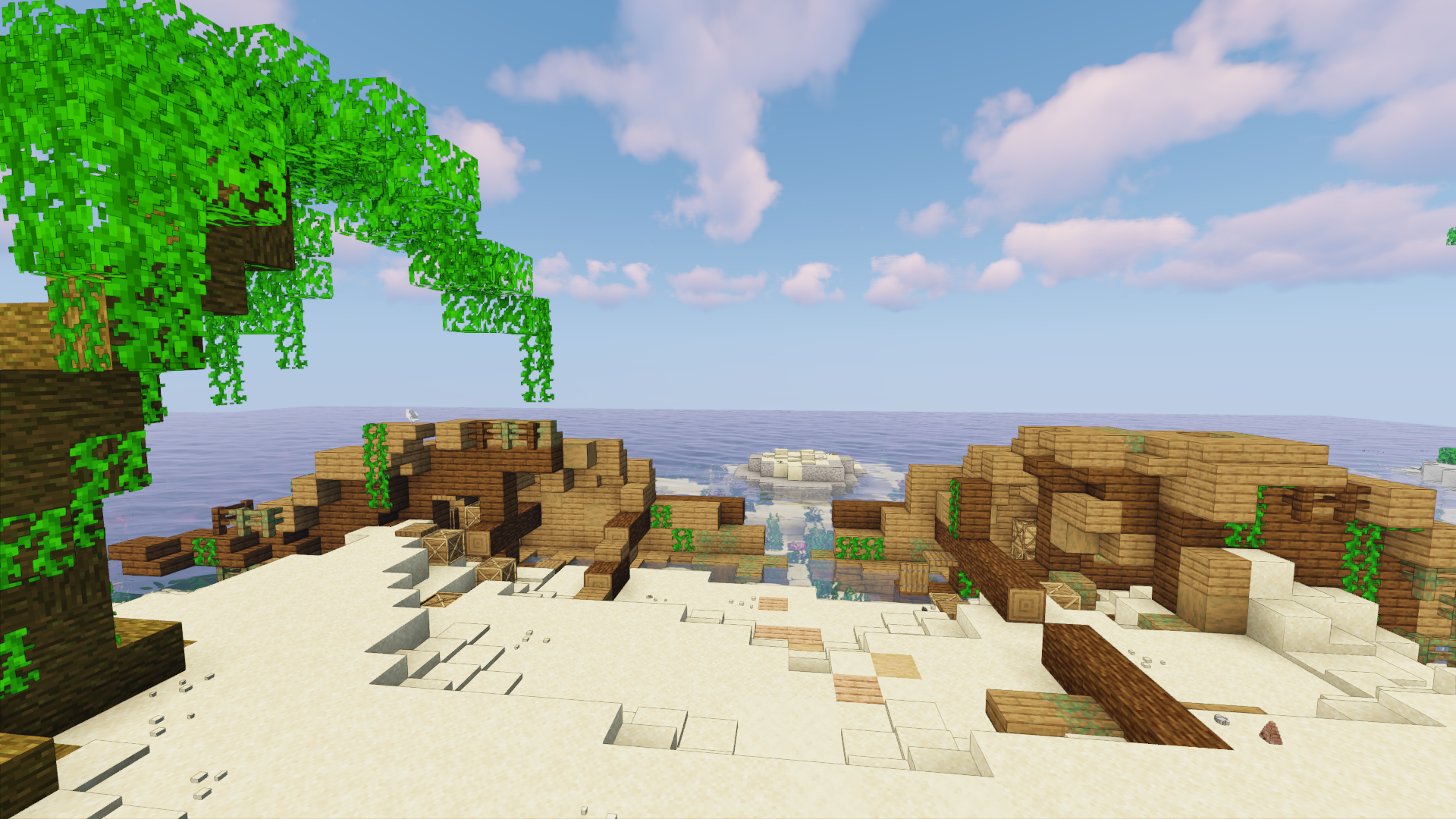 "Escape from the island!"

Gather items & materials to build a raft. Defend the raft so that enemies don't destroy it. Craft & enchant items to escape faster!


The goal in this map is to build a raft. At the start there's simply an empty site where the raft needs to be constructed. As the game goes on you add materials to gradually construct the raft.


To find all the materials needed for the raft the game provides a map which marks all important locations. The map can be accessed in the advancement screen, and also shows your current location!


The raft also requires some items that need to be crafted. In the Crafting Table you can make all these items out of the various materials using our custom crafting system.


To eventually obtain materials more efficiently, enchanting your items at the enchanting table is helpful. To do this, you need to obtain XP, by fighting enemies, putting materials into the raft or crafting items.


One last important feature of the map is the day-night cycle. Five minutes of day are always followed by two minutes of night. During the day the island is relatively safe, however during the night ethereal creatures will rise from the sea and come down from the sky to sabotage your efforts in escaping the island. Defend your raft against them, so that they are unable to destroy it!


Submit a video showing how you got your score on our discord here or in the comments on this page to appear on the leaderboard. Alternatively, you can play on realms and submit your score automatically. Default mode is recommended, but Hard mode scores are valid. Scores made with more than 3 players are not accepted.

Submit a video on this page or play the map on realms to enter the leaderboard.

For Easy/Medium/Hard play on that difficulty. Beeb% and Crow% can be completed by finding the Beeb or all seven Crows during a game, difficulty can be any. For Death% die as quickly as possible (on any difficulty). Generally using bugs in the game or Minecraft is not allowed.


This map was made for the second Vertex Map Jam, where each team (1-3 people) had to create a themed map within 2.5 days. The themes were Isolation, Ethereal & The end is the start. Two or more themes had to be used. Isolated Isle uses Isolation & Ethereal.

24 of the participating teams submitted a map at the end of the jam. This map was made by Team Sally, made up of McTsts, gibbsly & venomousbirds. This map reached Fourth Place. Before publishing this map, it has been slightly extended, balanced, and fixed.

Improved & Extended with the help of Asometric